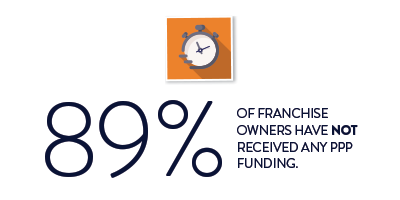 “Franchise owners across the country are working to keep employees on payroll while giving back to their communities – and in many cases, they’re doing so while their businesses are completely closed.

“While the PPP is far from perfect for some of our members, replenishing the program, and ensuring that it remains available for those who need it, is the best way to make sure that as many employees as possible can remain on payroll and have a workplace to return to once this crisis passes,” he added.

The survey results show that the vast majority of businesses have not received PPP funding. These are small businesses that are trying to keep their employees on payroll but cannot do so because they do not have funding and do not have customers to bring in revenue.

Additionally, the survey results show that many of those who have had their loans approved are still waiting for their money. Without these funds, many franchise businesses will be unable to make payroll and pay other business expenses, like rent and utilities.

Share your story of how your brand is making an positive impact.